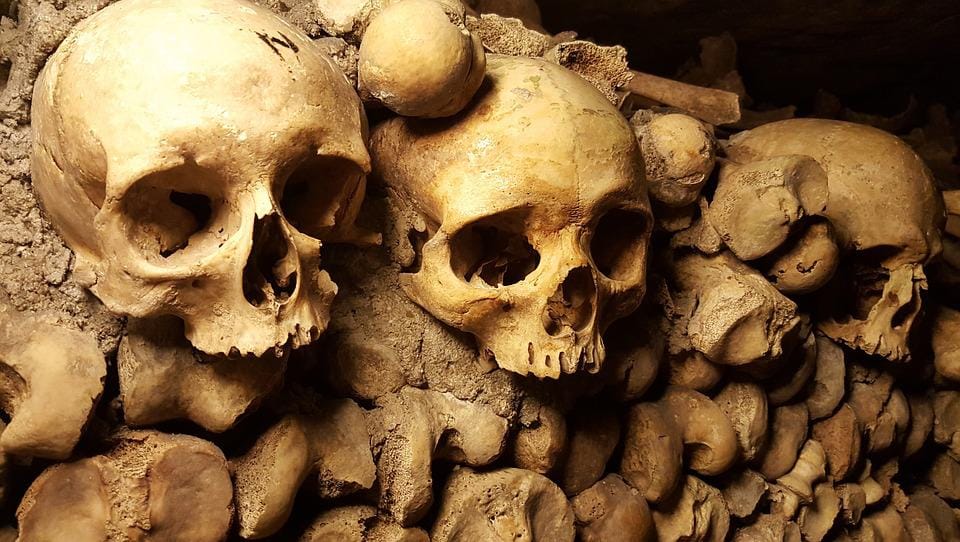 If you’ve been researching the best places to visit in Paris, you might have encountered the usual suspects like the Eiffel Tower or the Louvre. While these are great places to visit, another lesser-known location is an absolute must-visit. That place is the Iconic Catacombs of Paris.

This place isn’t for the sensitive soul or someone who finds death, disease, and human remains triggering. But if we’ve piqued your curiosity enough and you haven’t exited this page yet, then keep reading. This guide shares all the information you need to know about visiting the Paris Catacombs.

What are the Iconic Catacombs of Paris?

Underneath the streets of Paris lies the evidence of the city’s dark history. The Paris Catacombs is a maze of underground tunnels located 65 feet below the surface. It spans an extensive breadth of the city. The Catacombs house the bones and skulls of millions of deceased Parisians, who lost their lives at the hands of the Black Death, i.e., the Bubonic plague.

History of the Catacombs of Paris

The Bubonic plague ravaged the country of France between 1347 and 1352. Over a hundred thousand people died in Paris after being infected by the Black Death. As the bodies piled up and the city’s cemeteries became overpopulated, city officials in Paris decided to build an ossuary. In this underground burial chamber, the remains of the dead could be placed and viewed by those who wished to do so. The mass graves of the Catacombs were constructed to accommodate. Over the following centuries, Parisian government officials ordered many overcrowded cemeteries to re-bury their dead in this large Ossuary. Over time, the Catacombs of Pairs housed the remains of nearly 6 million people. Unfortunately, visitors are allowed to see only a tiny 1.25 miles section of the massive Catacombs and view only a select area of remains.

Where is it located?

The Catacombs can be visited all year round. However, the peak tourist season is between March and August, when you’ll find a crowd queuing at the Catacombs.

The cost of tickets for the Catacombs of Pairs is –

Onsite purchase at the gate –

Ultimately, the tickets are less expensive at the gate. However, we still recommend you purchase them online because the wait time at the gate for onsite ticket purchase can take 2-5 hours.

Are there audio guides?

Yes, there are. You will receive audio guides in different languages at the gate at an extra charge.

Inside the Catacombs: Room-by-room description

Once you’re in the Catacombs, the actual Ossuary doesn’t start until you climb down a spiral staircase. It can feel dizzying and claustrophobic going down the 130 steps or so. After about 5 minutes of climbing down, you reach the start of the Ossuary. Immediately you’ll see all the walls lined with skulls and skeletons. They’re placed neatly and don’t give off a frightening appearance.

First Room – Exhibition of the history of the Catacombs – In this first set of tunnels, you’ll find wall panels with miniature construction and images of the Paris Catacombs. Some plates with information in different languages give the site a brief history.

Third Room – Quarryman’s Footpath – After that, you’ll find the famous well inside the Catacombs, where the quarrymen who were in charge of burying the bodies would visit to get water for drinking, cleaning, and mixing the cement needed to put the bones in place.

Fourth Room – The Ossuary – This is the central part of the tourist section of the Catacombs. Here, you’ll see unique landmarks such as the Crypt of Passions, the Sepulchral lamp, the Fountain of the Samaritan, Gilbert’s tomb, and a spring. Also, you’ll see the highest concentration of skulls and bones, laid out in unlike formations.

The exit stairway – Lastly, after you exit the Ossuary, you must climb around 100-odd steps to reach the surface. This is a different staircase from the one at the entrance. It will lead you to a gift shop and the outside world, where you can exit the Catacombs and head to your next spot.

The Catacombs are sanitized and designed aesthetically to retain the location’s somber aura without causing acute uneasiness to visitors. However, it can be quite a sight, and many people feel upset or queasy during their visit. If this is the case, here’s what you can do about it –